The mosque, built in 1891at the North Camel Camp, was the first mosque to be built in NSW and is a unique part of Broken Hill’s rich heritage, with links to the early Afghan and Indian camel drivers. Broken Hill’s Afghan community also contributed money towards building a stone mosque in Adelaide and these two mosques are the oldest surviving in Australia. One room of the Broken Hill Mosque Museum is still a functioning prayer room. A smaller single-room mosque from the old West Camel Camp was moved to the grounds of the North mosque in the early 20th century.

The Broken Hill main mosque had fallen into disrepair by the 1960s, but was renovated by the Broken Hill Historical Society and then re-dedicated on 21 September 1968.

During 2019, however, significant restoration work has been carried out on the mosque, over fifty years after the mosque’s dedication, and it also includes restoration on the smaller mosque that came from the old West Camel Camp.

This restoration included new flooring in the Prayer Room of the main mosque and work to the side storeroom.

Restoration work in the Prayer Room, during 2019. Photo from Broken Hill City Council

Work also included refurbished walls and a new verandah for the small mosque from the West Camel Camp.

Bobby Shamroze inside mosque, after restoration. Photo from Robynne Sanderson

Work still to be done includes sealing parts of both buildings at ground level for dust-proofing, plus a later installation of an external toilet.

Dr Kate Gahan, a contracted Museum Advisor with Broken Hill City Council, spent a week in October training and working with Historical Society volunteers Bobby Shamroze, Gary Cook and Robynne Sanderson to begin cataloguing items in the Mosque Museum collection. Items are being returned to the mosque for display after they are catalogued. Cataloguing will continue in 2020. Kate is also working with the volunteers to look at options for upgrading the museum display, such as information panels and new display cabinets, as a preliminary step towards applying for a grant to fund this work. 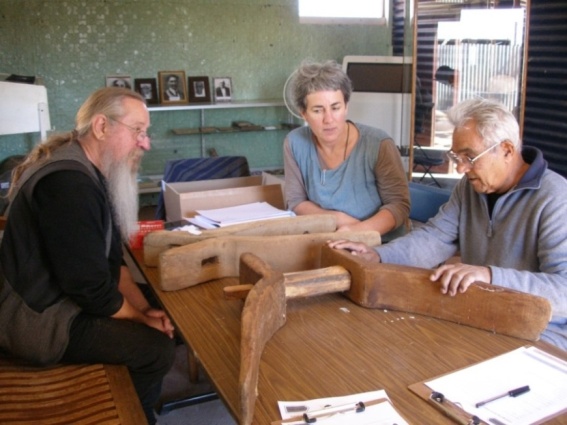 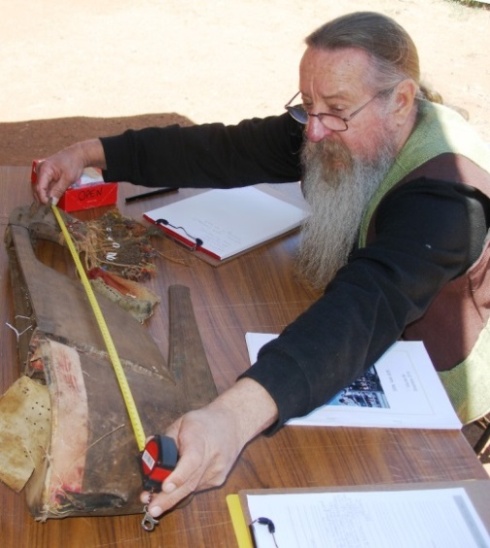 Each item must be measured. Photo by Robynne Sanderson

Following extensive preservation work in 2019, the mosque received a Heritage and Culture Award in the NSW 2019 Tidy Towns Awards, for its significance as the only surviving ‘Ghan Town’ Mosque in Australia. (An article about the award appeared in the Barrier Daily Truth on Monday 4 November 2019, p. 4.)

A large photo of Akbar Khan, a friend of Shamroze Khan, was donated by his granddaughter, Pat Egan. This photo will be hung in the mosque’s museum room.

A new multimedia display provided by Broken Hill City Council helps to preserve the story of the mosque, bringing it to life in new ways. This audio-visual display tells the history of the cameleers, the mosque and recent restoration work. It includes interviews with Bobby Shamroze and other locals, as well as people involved in the 2019 restoration work. 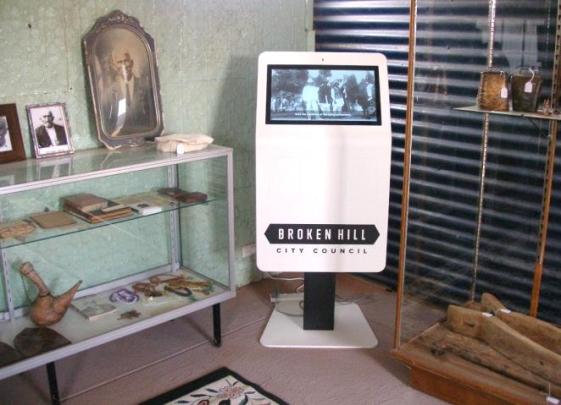 In February, a group of students from Wiley Park Girls High School in Sydney were shown through the mosque.

There were fewer visitors than usual during 2019, owing to the mosque being closed for restoration work from May until early August, but for the remainder of the year there was a steady flow of visitors. This included several small groups of visiting Muslims such as a group of 10 people from the Mildura mosque. As in previous years, the majority of visitors toured the mosque by appointment rather than by the Sunday tour at 2pm.

In October, the mosque was visited by Jihad Dib, NSW’s first Muslim member of parliament in the NSW lower house.

Jihad supported our application for grant funding for the mosque restoration work and was thrilled to be able to visit the mosque with his family. He commented in the Visitors’ Book, ‘Thank you for keeping the story alive’.

Bobby Shamroze, whose full name is Amminnullah Shamroze, has been a member of the Historical Society and looking after the mosque for over eleven years. Bobby is a son of Shamroze Khan and a grandson of Zaidullah Faizullah, the last practising mullah of the Broken Hill Mosque.

Robynne Sanderson has been a member of the Historical Society since 2016. She presented a paper, ‘The Cornish influence on music in Broken Hill’, at the 2017 Biennial History Seminar at Kernewek Lowender Cornish Festival and wrote an article on this topic for the 2017 Historical Society Journal.