What a history this building has. And what a museum it has become.

It is one of the most valued heritage museums, not only in NSW, but in Australia.

The Silverton Gaol Museum is in Burke Street, Silverton.

The Gaol Museum is now open every single day of the year, except Christmas Day, from 9.30 am to 4 pm.

You can contact the museum Coordinator, Ross Wecker, via:

The entry fees are:

The Silverton Gaol was erected in October 1889. RHB Kearns noted that:

The original Gaol consisted of a makeshift wood and iron structure. Prisoners were secured at night with leg-irons to prevent their escape and, when the limited cell accommodation overflowed, were chained to a nearby peppercorn tree (Kearns 1968). 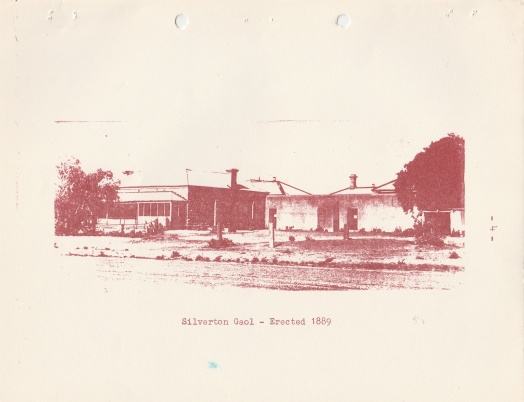 Kearns (1968) also noted that following the opening of a Gaol in Broken Hill in 1892, the establishment of the courts there, and a decreasing population in Silverton, the Gaol was then used only for short-term prisoners, such as overnight lock-ups. By the 1930s the property had been abandoned, becoming a target for vandalism, until the intervention of the Broken Hill Historical Society in 1966 saw its transformation into a museum (Kearns 1968, p. 7).

The following extract from a letter in March 1987 by the then Honorary Secretary of the Society, RR Wallace, to a Professor T Bennett at Griffith University, notes: ‘In 1966 the Lands Department advertised the building for sale to be demolished’ (Wallace 1987).

The sale was announced first in the Barrier Miner newspaper on December 17, 1965:

FOR SALE —ONE POLICE STATION

A 2-acre Crown land block at Silverton will be offered for sale at public auction on Wednesday, January 19, 1966.

Announcing this today the Minister for Lands and Mines, Mr. Tom Lewis, M.L.A., said that the block … was formerly the old Silverton police premises. Included in the reserve price of £250 are the buildings, which comprise the old police premises. These buildings have been unoccupied for some time and are in a bad state of repair. (Barrier Miner 1965a)

Wallace (1987) notes that the December 17 advertisement led to ‘an urgent appeal to the Minister with a plan for alternative use as a museum’.

By December 18, 1965, only one day after the initial announcement, the Barrier Miner (1965) was reporting that ‘[t]he Broken Hill Historical Society is to take steps to have the Silverton Police Station retained as a historical and tourist attraction.’

The Society then sent telegrams to the sitting members for the then electorates of Sturt and Cobar, and to the current Minister for Lands.

Telegram from then President of the Society, J J Prendergast, to
the then member for Sturt, Mr W E Wattison, at Parliament House NSW, 1965
(Ralph Wallace Research Centre Archives)

The telegrams saved the day.

The Broken Hill Historical Society was instrumental in setting up a special Trust in 1966, and the premises were ceded to the Trust by the N.S.W. Department of Lands early in 1968 … A historical museum has been established in the Gaol for the display of photographs, documents, household, pastoral and mining equipment and other items …

The Silverton Gaol and Historical Museum was officially opened for public inspection on 15 September 1968. (Kearns 1968, p. 7)

The comprehensive collection at the Gaol Museum, and its detailing,  was put together by a large number of people up until this historical point, and for so many years thereafter.

The Silverton Gaol Museum’s beginnings are truly a fascinating story.

Recently Gary Cook, member and former Society Secretary, has shared a little of his research from Trove, with stories from the early history of Silverton in 1887 and 1930 newspapers.

Other good sites for further, and more detailed, information about the current  artefacts and exhibitions that the Silverton Gaol Museum holds can be found at Trip Advisor and  at Broken Hill City Council, under Outback Museums.