Broken Hill’s Synagogue is one of only three Synagogues outside Sydney, NSW to have been preserved, restored and heritage-listed. The property is owned by the Broken Hill Historical Society and now houses the Synagogue of the Outback Museum.

The museum is one of the most remote Jewish museums in the world, with its Synagogue reminding us of the evolution of the Jewish community in regional Australia.

The Synagogue Museum is at 165 Wolfram Street, Broken Hill.

The museum is now open again on Mondays, Wednesdays and Sundays from 10 am to 3 pm, or by appointment with the Synagogue Museum’s Coordinator, Margaret Price. You can contact the Coordinator to make an appointment via:

There is no entry fee, but donations are very welcome.

A vibrant and successful community of Jewish people existed in Broken Hill for three generations from the 1880s to the 1960s, most of whom had their origins in Central and Eastern Europe.

In 1900 when there were about 150 in the local Jewish community, a Hebrew congregation was formed. Religious services were initially held at the Masonic Hotel and, in 1905, Rev. Mandelbaum was appointed minister. In 1907, the Wolfram Street site was granted by the NSW government for the erection of a Synagogue.

The foundation stone was laid on 30 November 1910 by Solomon Saunders, President of the Adelaide Hebrew Congregation. The Consecration of the Synagogue was performed by Rabbi F L Cohen of the Sydney Synagogue on 26 February 1911.

Following the slow decline of the Jewish community in Broken Hill during the 1950s, in 1962 the Synagogue closed and its scrolls and silverware were transferred to a Melbourne synagogue (although replicas of some original items are now included in the museum collection). The last Rabbi to serve the Broken Hill congregation was Abraham Berman.

The building was subsequently used as a residence. In 1989, however, a permanent conservation order was placed on the building. The building had declined but was saved through the efforts of people such as Alwyn Edelman and Harold Griff, descendants of Jewish families in Broken Hill, and also local historians Richard (Dick) Kearns.

The Synagogue was purchased by the Broken Hill Historical Society in 1990 and restored, then opened in 1991. The Society later built, at the back of the Synagogue complex, the Ralph Wallace Research Centre, which then became the Society meeting room. The work of building the collection now held in the Synagogue of the Outback Museum has taken place over many many years.

In March 2018 the Synagogue Museum had the pleasure of participating in and helping host a celebratory happening: a five-day visit of over sixty members from the Orthodox Jewish Ark Centre in Hawthorn, Melbourne where the Synagogue was once again used for worship. 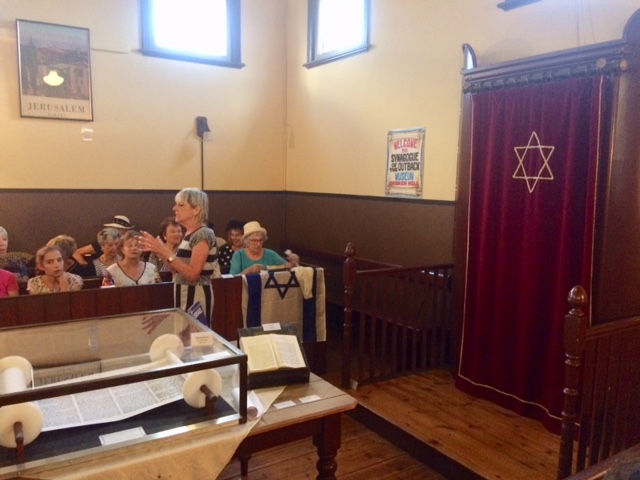 Women from the Ark Centre praying in the Synagogue

Further detailed information about the Synagogue of the Outback Museum is offered at the Broken Hill City Council site, under Outback Museums.