Next year, 2019, will be the official tenth anniversary of the opening of Silverton School Museum. It sometimes feels amazing that we have been open for that long. It seems even more amazing that three volunteers, myself with Ray Allen and Maxine Taplin, only began to put together the collection we have now in March 2008.

The school was dedicated as an Educational Museum, and formally opened, on Sunday 7th June 2009. So, it certainly seems like the right time for some reminiscing about that day. 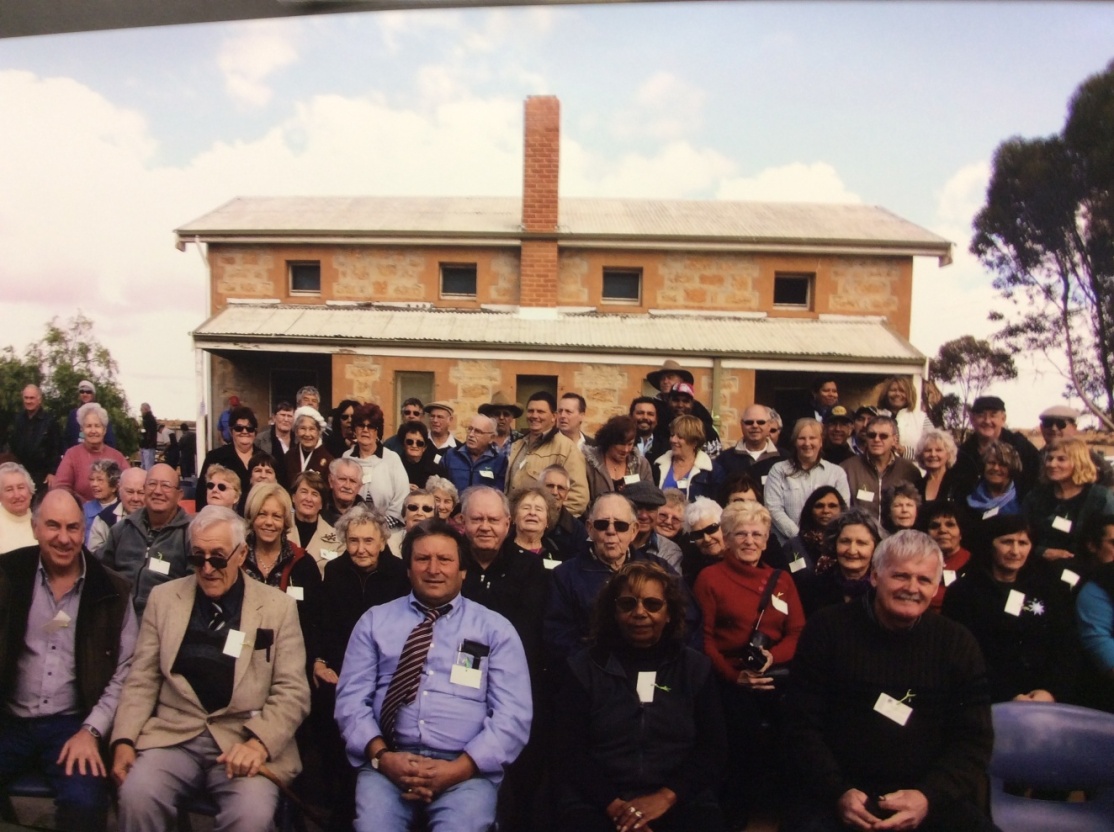 Every part of the 2009 opening ceremony was undertaken by former school students, except for the address given by Ross Mawby, the then President of the Broken Hill Historical Society. The ribbon was cut by the oldest surviving student, my aunt, Dorothy McInnes, nee Bray, who has since passed on.

At the 2009 opening ceremony the Community Voices choir sang ‘The Wattle Song’ (written by ex-student Emily Witty, nee Rawlins) and ‘I’ve been working for the “Tramway”’, amongst other songs. Some students spoke about their memories of their schooldays at Silverton and a piece by a former teacher, who was just 19 when he came out to Silverton to teach, was also read out. Shirley Lewis unveiled the plaque. Shirley is the granddaughter of Joseph Watts, who was the fourth Head Teacher of Silverton School (from May 1886 to the end of 1890), but she had never met her grandfather.

At least 70 former students attended the opening, so the roll call was large and had to be divided into three parts.

On the opening day the bell was rung, calling all to order and to gather on the chairs in front of the school. The Union Jack was raised, and local singer Don Mudie sang ‘God Save the Queen’—because Queen Victoria had been on the throne when the school was first opened in 1884. It opened, indeed, as a NSW Education tent! The teacher was Mr Mackie who, for the first year, lived with his family also in a tent. But in 1885 the Education Department built a wood and iron school classroom to suit 60 pupils, and a residence was built for the teacher and his family.

Although the school was initially built to hold 60 pupils, this number rapidly grew to over 140. The highest number of pupils, 293, was reached in or around 1890. Transportable classrooms were then added. It was the fourth teacher who taught at Silverton, Joseph Watts, with co-teacher Mary Cameron (later Dame Mary Gilmore), who successfully agitated through publicity for a new larger school building. In 1888 the current school building was built. It was different then to now, having an open fireplace and galley seating for students and longer windows. The blackboards were at the side rather than at the front of the school, and the front of the class was facing the long side of the building to the left as you walk through the door.

The Silverton School closed, as a school, in 1970.

The Broken Hill Historical Society (BHHSoc) took over the Trust of the Silverton School building in 1977. The building was initially used as a place to store items.

A local family, the Marshams, then leased it for several years and ran a craft and Devonshire Tea shop.

At the point at which the Silverton School Educational Museum Committee began to put the room together in 2008, the public had access to the building as a museum.

Visits from schools and other groups in 2018

The Silverton School Educational Museum is regularly visited by groups, including those from clubs and schools.

In the past, the Museum has had groups from Bourke, Wilcannia, and Menindee, from the School of the Air, and from Sydney Colleges.

This year, in November, the Museum had two important visits from groups.

The first was made by Irymple Primary School from Mildura, Victoria. The school had made an initial visit in 2017 and decided then to come back in 2018 to spend a longer time and have ‘lessons’ taking them back into the very early years of education in Australia.

The experience becomes very real for the students, as for this kind of visit we add ink to inkwells, give them pens for writing in ink on paper and also introduce them to slates, and slate pencils. 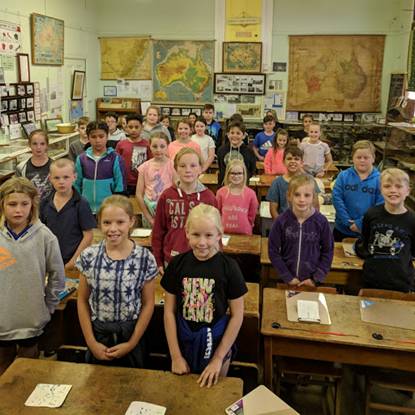 Visitors from the third class of Irymple Primary School

Some of the highlights of such visits include the comments children make and the questions they ask. One of the questions important in highlighting the difference between the past and now was asked by a tiny girl, who said: ‘Did they have fake fingernails in the early days?’ Looking at her hands, I noticed her nails had been professionally done.

We have also often had pupils like the little boy who told me he wished he could come to this school because he loved it, and who then found many of his classmates agreeing with him.

Some pupils, for example, are very interested in what might happen if a snake entered the school building. One day, when dozens of children from Alma Public School were visiting, Sheila, our resident shingle-back lizard, was wandering around the yard. I carefully shooed her away but the children were fascinated nevertheless.

Then I would close the door. And the snake would be inside and we would be outside.’

It hasn’t happened in real life yet, thank goodness.

Amongst the acquisitions for the Museum this year, two quite delightful items were donated.

The first is a Tonette, which is like a recorder but smaller, with its own music book. It was used in the 1950s. This donation was made by a visiting school teacher from Victoria.

The second is a leather seat for a tricycle that the School Educational Museum has had for some time. It is a 1950s ‘koala’ seat, as in it has an imprint of a koala in a tree on it. It was in brand new, mint condition, never having been used.

The person who donated the bike seat was a bicycle and tricycle mechanic who worked for the manufacturers of the seat. 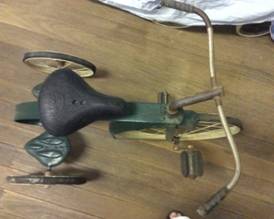 The tricycle with koala seat on

The Silverton Educational Museum Committee wishes to acknowledge, in memoriam, the volunteer help and assistance given over recent years to the Educational School Museum by the late Ken and Frankie Mills, Edith Wilson and Bob Murphy.

About the author: Marlene Bettes is the Coordinator of the Silverton Educational School Museum. She has been a member of Broken Hill Historical Society since 2002 and has a long history in the Silverton area. Marlene and her sister Maxine’s grandparents attended Silverton School in the 1890s and 1900s with their siblings. Two of the oldest of the siblings also attended Thakaringa School. Marlene and Maxine’s father, Jack, with his siblings, Rex and Joyce, attended Umberumberka Reservoir School until it closed in 1936.

‘We were working on the verandah, and I was about to enter my History and a “willy willy” carried off the paper. Sorry.’

‘I am leaving out the first sum because it does not say what price are the lead pencils. It only says: “what will be the cost of 31 penny pencils?”’

‘I shall try to be neater but most of my smudges are made when my plaits fall over my shoulder.’

Answer given when asked the meaning of the sentence: ‘Uneasy lies the head that wears a crown’: ‘A crown does not prevent a King from having a headache’.